The roots of Moreng Metal Products can be traced back to 1902, when Joseph H. Moreng, an ornamental ironworker and blacksmith who had emigrated from Switzerland, founded Joseph Moreng Iron Works. Originally located in New York City, the company fabricated iron components for the local Western Electric (now Lucent Technologies) installers in 1912. In the early 1930s, his sons, Joseph and George, joined the business. They brought with them fresh and innovative ideas that helped the company win lucrative contracts from big telecom players like New Jersey Bell and New York Telephone. To meet the demand for an increasing range of products, the brothers moved the company to Ridgefield, NJ, and added a sheet-metal department.

One of the first checks signed by Joseph Moreng, originally called Joseph Moreng Iron Works in NYC through the Corn Exchange Bank in 1904.

After graduating from Duke University as engineers, both of the founder’s grandsons—Joseph III and James—joined the company, armed with strategic plans that would allow the business to expand and diversify. Precision sheet-metal fabrication machinery as well as finishing equipment was added, bringing the company steps closer to becoming an all-inclusive “one-stop shop” for its customers.

In 1985, as the business continued to grow, leadership determined it was time to move the organization to a new, larger 45,000 sq. ft. facility in Totowa, NJ. At the same time, Joseph Moreng Iron Works was renamed Moreng Metal Products, Inc., in effort to ensure the company’s name was an accurate reflection of its wide range of services and capabilities.

Our manufacturing for several of the so-called “Baby Bells” continued to ramp up, with Moreng Metal Products producing everything from microwave tower parts to terminal lugs for these major telecom players. To ensure we were delivering the best possible products and service for what was becoming an increasingly specialized industry, we launched a sister company, Moreng Telecom Products, in 1997. Located just a few miles from Moreng Metal Products, this spin-off organization focuses solely on designing and fabricating components for the telecommunications industry.

In the late ’90s, we increased our building’s footprint to 60,000 sq. ft. as we began manufacturing entrances for the elevator industry, security carts (for laptop computers and projectors), battery racks, and computer chip-processing machinery. 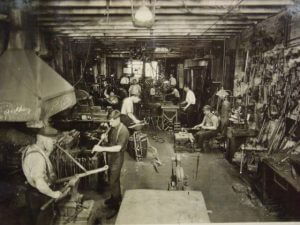 Over the past decade, we’ve expanded into several new sectors, including renewable energy, data management, and heating and bio-fuels. We’ve also added new capabilities to our service offerings. The addition of a paint line and advanced powder-coating capabilities have helped us win new customers who appreciate our comprehensive, end-to-end manufacturing services. We also added state-of-the-art equipment, including the Amada 2510 NT punch press and the Amada LCG 3015 AJ fiber laser, to our Sheet Metal department and five robotic-welding cells to our Production Welding department, which enable us to perform high-volume work with unmatched speed and precision.

The fact that we’ve been in operation for well over a century is a testament to our ongoing efforts to delivering top-quality products, caring for our employees, using our resources responsibly, and giving back to our community. As the proud owners of a fourth-generation, family-owned group of companies—James’ daughter, Heather, works at Moreng Metal and Joseph III’s children, Kim, Brett, and Joseph IV, work at Moreng Telecom—we remain steadfastly devoted to upholding our commitment to the standards and ideals upon which our company was built—for the next 100 years and beyond.